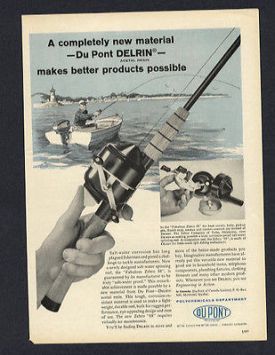 Acetal, also known as poyoxymethylene (POM), is a very commonly used thermoplastic material that we are all familiar with. Everyone in the industry has a story of the time when someone ran some acetal at too high a temperature and had it degrade filling the plant with formaldehyde. However, not everyone is aware that there are actually two different versions of acetal on the market, copolymers and homopolymers.

I see a lot more copolymer being used than homopolymer at injection molders which puzzles me. This might be because the homopolymers tend to come at a premium price. Sometimes, however, you get what you pay for. A brief history of acetal might explain why homopolymer is more expensive and also why you should consider using it

Polyoxymethylene was discovered in 1920 by a German scientist named Hermann Staudinger. However, the polymer was just too thermally unstable to be commercially viable. Basically, the molecules would fall apart under heat, essentially un-polymerizing themselves and turning into the constituent chemicals, one being formaldehyde.

In 1952, research chemists at DuPont started work to manufacture polyoxymethylene that was stable enough to be commercially viable. By 1960, this work was complete. In layman’s terms, DuPont developed a method of putting an “end-cap” on the molecular chains in order to prevent the molecules from unraveling when heat was applied. According to Wikipedia, they achieved this by “reacting hemiacetal ends with acetic anhydride”. This resulted in a relatively stable thermoplastic that was melt processable. DuPont sold this material known as acetal which is really more of a nickname under the trade name Delrin.

Meanwhile, over in Germany, chemists working for Celanese in conjunction with more chemists working for Hoechst AG (pronounced approximately Hurkst) were working on a different solution to the problem of the instability of polyoxymethylene. They decided that the best solution was to use polyoxymethylene in a copolymer with the comonomer being dioxolane or ethylene oxide. The copolymer acetal was actually more stable than the homopolymer being sold by DuPont. Hoechst Celanese started selling the acetal copolymer under the trade name Celcon and later Hostaform.

As you can see the homopolymer has significantly higher tensile strength and tensile strain, flexural modulus and surprisingly, the impact strength is higher as well. In addition, homopolymer has superior creep resistance and fatigue resistance than copolymer. The chemical reasons for the better properties are probably beyond the scope of this blog but if you want to read more, I would direct you to this paper from DuPont (PDF). I realize, of course, that DuPont has a vested interest here but the paper is instructive.

You might ask why anyone would have ever used copolymer when homopolymer has such superior properties. The reason is that the methods that DuPont used to stabilize the homopolymer did not work quite as well as the copolymer method that Hoechst-Celanese used. The Delrin material had a significantly narrower processing window than Celcon.

After the original Delrin was introduced, DuPont kept working on methods to improve the stability of Delrin. The first grades with improved thermal stability were known as Delrin II grades, for instance Delrin 500 became Delrin II 500 (see update below). The last major improvement took place in 1992 when Delrin P grades were introduced. For instance Delrin II 500 became Delrin 500P. For legacy applications, DuPont still supplies small amounts of Delrin and Delrin II grades but the P grades are now considered to be the standard grade. If you ask for Delrin 500, you will get 500P.

With the introduction of the Delrin P grades, homopolymer acetal has thermal stability that is just as good as the copolymer grades but with superior physical properties. There are really no drawbacks to using homopolymer acetal at this time unless you find that homopolymer is slightly too stiff for your application, then you might consider copolymer.

This is the reason that homopolymer tends to command prices that are 20-25% higher than copolymer. It really is a premium product. It probably does not cost more to manufacture but DuPont charges more because they can. In addition to the better properties there are a multitude of manufacturers making copolymer and really only DuPont and Asahi that make homopolymer.

One reason to run copolymer is if you require glass fiber reinforced acetal. Glass fiber does not bond as well to homopolymer as it does to copolymer so you will get superior properties from a copolymer such as Celanese Ceclon GC25A as opposed to Delrin 525GR

If your customers have problems with the performance of acetal copolymer parts, a switch to homopolymer might be just what the doctor ordered. The bottom line is that acetal homopolymer has superior properties compared to copolymer. Showing  your customers the differences between the two grades might help you to justify the higher price of homopolymer.

I recently purchased an International Plastics Selector book from 1988. I noticed that the book shows data for Delrin 500 and Delrin II 500 both which means that DuPont was selling both grades side by side in 1988. I have not been able to determine when Derlin II replaced Delrin but it must have been sometime right before 1988. 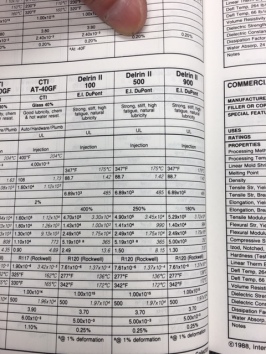 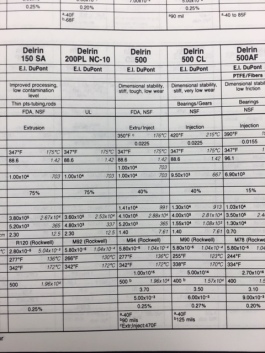