The picture above shows the pristine Pacific Ocean that used to exist before the ocean was destroyed by plastic waste. Hit the jump to see what the Pacific Ocean looks like now.

Oh wait, that first picture was the Pacific Ocean garbage patch. We have been led to believe that it looks like this: 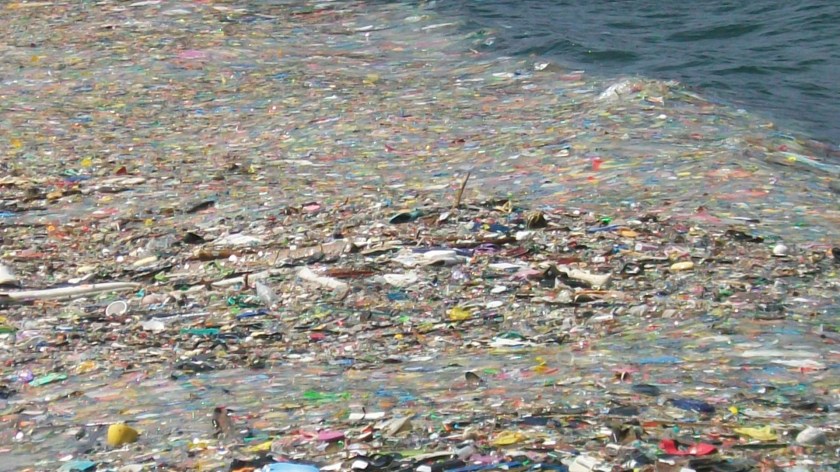 The so-called garbage patch is not an island like has been described, but a relatively small (relative to the size of the ocean) amount of floating plastic scrap that has accumulated in an area that is about 1.6 million square kilometers (618,000 square miles) according to The Ocean Cleanup, an environmental group based in the Netherlands. The Pacific Ocean is 165 million square kilometers (64 million square miles) by the way. Ocean currents have pushed the floating garbage into a relatively compact area.

That is the scope of the problem, now lets see what the garbage patch is.

According the The Ocean Clean Up, the plastic garbage is made up of approximately

Note: I have derived these percentages from information on their website.

While everyone is focused on post-consumer plastic items like drinking straws and grocery bags, note that most of this stuff is from the fishing industry. Also based on what washes up on the beaches, I suspect that a large percentage of the 46% of hard plastic parts, film and sheet are from manufacturing plants and not post-consumer waste.

According to a study published in The Journal Science, the vast majority of the scrap floats east from six nations: China, Indonesia, The Philippines, Vietnam, Sri Lanka and Thailand. These countries are all low-cost manufacturers which lends credence to my theory that we are looking at post-industrial waste.

The solution to this problem is not banning plastic consumer items but for newly industrialized nations to develop waste disposal systems similar to what we have in the United States. I am pretty confident that the last time I went out to eat, that my drinking straw did not end up in the ocean because I tossed it into the receptacle by the door of the restaurant and from their it went into a dumpster behind the restaurant and then the dumpster was picked up and dumped into a landfill. I consider it highly unlikely, that the restaurant owners dumped the garbage into a nearby river. Garbage disposal is not terribly expensive and the fines for illegal dumping are punitive.

I also find it highly unlikely that manufacturing plants in the US and Canada are dumping their scrap in waterways. The fines for doing this would be massive and the cost of waste disposal is not that high. Most plastic processors either reuse their scrap or sell it to a recycler.

The fishing gear which is the majority of the garbage has its own challenges. The gear that is floating is polypropylene and polyethylene but there is also a lot of nylon nets and rope that are used. Some of this gear is not from boats but from commercial fish farms that get damaged in storms. The nylon material does not float and is likely on the ocean floor.

There are no simple preventive measures for this problem. We can pressure the countries that are the culprits to clean up their acts but this will likely have limited success.

The previously mentioned Ocean Clean Up is developing some equipment to help clean up the scrap. It is supposed to be deployed this summer. If they were smart, they would sell the scrap that the collect for recycling. People would probably buy plastic items that were made from genuine Pacific Garbage Patch recycled plastic. Just don’t make the items in Asia so it doesn’t end up in the ocean again.